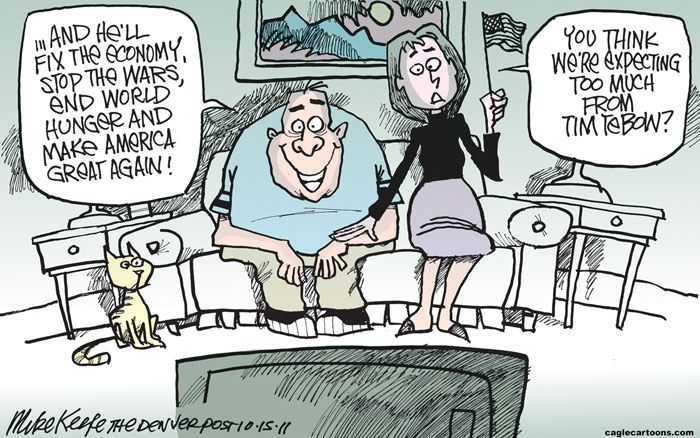 So, does that make Tim Tebow the white Barak Obama? Cartoon ©Copyright 2011 Keefe - All Rights Reserved. Used with permission.
#Keefe #Political Cartoon #Political Humor #Tim Tebow
For the second year, Texas Longhorn quarterback Colt McCoy has been named a finalist for the Heisman Trophy. Other finalists include: Even after McCoy's less than Heisman-worthy performance Saturday night, I like his odds of winning. Many of the votes were probably cast prior to the Big 12 Championship against Nebraska, when his stellar game against Texas A&M was still front of mind.
#Alabama Crimson Tide #Colt McCoy #Florida Gators #Heisman Trophy #Mark Ingram #Ndamukong Suh #Nebraska Cornhuskers #Standford Cardinal #Tim Tebow #Toby Gerhart
In one of the closest votes ever, Sam Bradford beat out Colt McCoy and Tim Tebow for the Heisman Trophy this evening. Bradford joins four other Sooners in winning the award, including upstanding citizen Billy Sims, who was unable to refrain from yelling out drunken comments during the ceremony. One wonders why someone who hocked his own Heisman Trophy was even allowed in the room. [...]
#Colt McCoy #Oklahoma Sooners #Sam Bradford #Tim Tebow
Texas Longhorns quarterback Colt McCoy was award the Walter Camp Foundation player of the year award. In doing so, he beat out his Heisman co-finalists, Sam Bradford and Tim Tebow. He also beat out a couple of guys from Texas Tech, Graham Harrell and Michael Crabtree.
#Colt McCoy #Graham Harrell #Michael Crabtree #NCAA Football #Sam Bradford #Texas Longhorns #Tim Tebow #Walter Camp
In an announcement that surprised no one, Texas Longhorn Colt McCoy, Oklahoma Sooner Sam Bradford, and Florida Gator Tim Tebow were named Heisman Finalists today. They're packing their bags for this weekend's ceremony in New York City.
#Heisman Trophy #NCAA Football #Sam Bradford #Texas Longhorns #Tim Tebow
Order was restored to the universe Thursday evening, with Texas defeating Texas A&M by the largest margin of victory in the series since the 19th century, Mack Brown getting his 200th career win, and the Longhorns taking sole possession of the record for the second most winning program in NCAA football. Was it enough to hold off Oklahoma in the BCS chase? Maybe. Maybe not. It was a impressive victory, and Mack Brown was able to maintain his classiness by calling off the dogs early in the fourth quarter. From here, we just have to let the chips fall where they may.
#Colt McCoy #Greg Davis #Mack Brown #NCAA Football #Sam Bradford #Stephen McGee #Steven McGee #Texas A&M Aggies #Texas Longhorns #Tim Tebow #Will Muschamp