Bryan Harsin dialed up some trickeration in the Oklahoma State-Texas game this weekend, with David Ash handing off to Malcolm Brown on a Statue of Liberty play. Brown took it to the house, although I'm blocked by someone jumping up in front of me. Heck of a fake, however.
#David Ash #Malcolm Brown #Oklahoma State Cowboys

There weren’t many highlights of last night’s game against the Oklahoma State Cowboys, but one of them was the halftime show by the Longhorn Band.

Tech Note: Shot with my Flip HD and processed in iMovie.…

#Longhorn Band #Oklahoma State Cowboys
Cotton Bowl Oklahoma State Cowboys vs. Ole Miss Rebels January 2, 2010, 1pm Central Arlington, Texas Network: Fox This should be one of the better games of the bowl season. Both teams are balanced and evenly matched. I only hope Fox and Time Warner let me see it. At the moment, they've agreed to a temporary extension, but it's not clear how long that will last.
#Cotton Bowl #Dexter McCluster #Dez Bryant #Jevan Snead #Keith Toston #Oklahoma State Cowboys #Ole Miss Rebels #Zac Robinson
A statement game. That's what the Texas Longhorns needed, and that's what they delivered, beating the Oklahoma State Cowboys 41-14, with two touchdowns coming from the defense. Texas moves to 8-0 on the season, and remains in the driver seat to go to Pasadena for the National Championship game.
#Aaron Williams #Colt McCoy #Jordan Shipley #Kenny Vacarro #Mack Brown #Matt Millen #Oklahoma State Cowboys #Sean McDonough #Will Muschamp
Over the summer, I had tonight's game against the Oklahoma State Cowboys in Stillwater was one to worry about. It has all the signs of a trap game. Road game at night. Against a team who is solid but unrespected. We had a good chance of going into it undefeated. And it's one year after that horrible night in Lubbock last season. The season started and the Texas Longhorns didn't do anything to make me feel better about the game. The offense appeared to be barely a shadow of last season's powerhouse. Making it to Halloween undefeated looked like a long shot. Then the Goon Squad began to assert itself.
#Dez Bryant #Oklahoma State Cowboys #Will Muschamp
The Big Twelve Conference had a solid showing in the first round of the 2009 NFL draft, with seven players taken in the initial thirty-two picks. The St. Louis Rams took Baylor offensive tackle Jason Smith with the second pick. A 6' 5", 309 pound converted tight end, Smith was the first non-special teams All American for Baylor since 1995. Texas Tech's Michael Crabtree was picked tenth by the San Francisco 49ers. Crabtree is easily the most talented receiver in this years draft, but dropped quite a few spots due to concerns over his attitude and resilience.
#Baylor Bears #Big 12 Conference #Brandon Pettigrew #Brian Orakpo #Detroit Lions #Evander Hood #Jason Smith #Jeremy Maclin #Josh Freeman #Kansas State #Michael Crabtree #Missouri Tigers #NFL Draft #Oklahoma State Cowboys #Philadelphia Eagles #Pittsburgh Steelers #San Francisco 49ers #St. Louis Rams #Tampa Bay Buccaneers #Texas Longhorns #Texas Tech Red Raiders #Washington Redskins
With Oklahoma State's loss to Oregon 42-31 in the Holiday Bowl, the Big 12 Conference is 1-1 in bowl play. It was the shootout we expected it to be, with Oregon only pulling away late in the game. So, some random thoughts, in no particular order [...]
#Dez Bryant #Holiday Bowl #Jeremiah Johnson #Jeremiah Masoli #Mike Gundy #Oklahoma State Cowboys #Oregon Ducks #Quinton Moore #Zac Robinson
Oklahoma State quarterback Zac Robinson and Stockard Channing? You tell me. 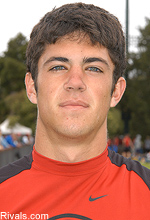 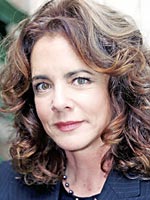 #Oklahoma State Cowboys #Stockard Channing #Zac Robinson
The Big 12 Conference attempts to go 2-0 in the bowl season as Okie Lite heads out to San Diego for the Holiday Bowl. This bowl has a history of high-scoring games with exciting finishes, and I don't expect this year's to be any different, with two rather evenly matched teams in Oklahoma State and Oregon. It could be the best bowl game of the season, so don't miss it. Unlike most of the NCAA, both teams tonight have strong running games. [...]
#Dez Bryant #Jeremiah Johnson #Kendall Hunter #LeGarrette Blunt #Oklahoma State Cowboys #Oregon Ducks
If it's the final Saturday in November, then it must be time for the Bedlam Series, the annual game between cross-state rivals Oklahoma and Oklahoma State. The Sooners are playing for a shot at the Big 12 Championship game and the national championship game. The Cowboys are playing for pride. Okie Lite hasn't won in seven years, but the last time they did so, Oklahoma was third in the BCS and had their national championship hopes dashed by the loss. Oklahoma State would certainly love to play spoiler again. [...]
#Baylor Bears #Bob Stoops #NCAA Football #Oklahoma Sooners #Oklahoma State Cowboys #Texas Tech Red Raiders