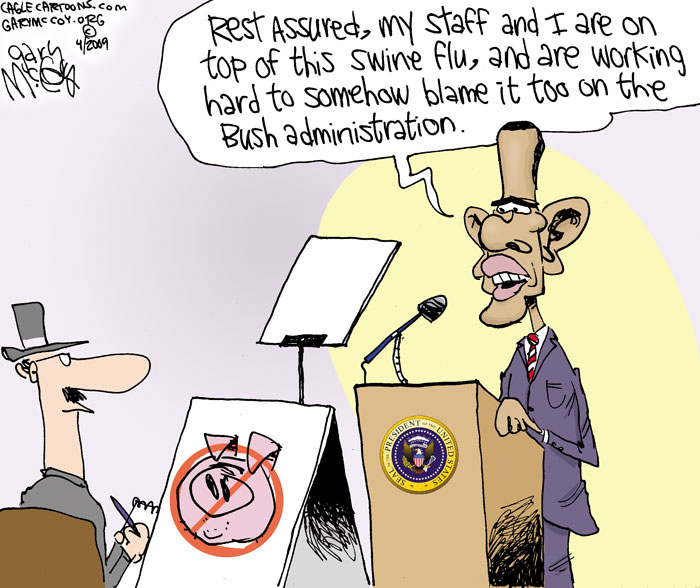 © Copyright 2009 Gary McCoy - All Rights Reserved. Used with permission.
#Barack Obama #Gary McCoy #Political Cartoon #Political Humor #Swine Flu
I'm a believer in the idea that if a political leader angers people on both sides of the issue, he may well have found a reasonable place in the middle. Barack Obama, who has been tacking hard to the left since January 20th, has thoroughly enraged both the RIght and the Left with his release of four memos detailing CIA methods of extracting information, while concordantly announcing that CIA interrogators who followed these guidelines would not be subject to prosecution.
#Barack Obama #CIA #Dick Cheney
The recent hijacking of an US-flagged ship and subsequent rescue of its captain by Navy SEAL sharpshooters has finally brought the ongoing piracy in the Gulf of Aden to the front of Americans' minds. While Somali piracy has been happening since the early 1990's, it has clearly escalated over the last few years. Given that the Gulf of Aden is part of the Suez Canal, avoiding it for shipping is not a viable option. Each year, 20,000 ships pass through the Gulf of Aden, including 12% of the world's oil supply. The Suez Canal was built because the alternatives were poor. With the almost complete absence of a functioning government in Somalia, expecting help from the land is a fool's hope. And sending troops ashore to deal with the pirates on land doesn't seem likely. Does anyone remember what happened the last time we had soldiers in Somalia?
#Barack Obama #Gulf of Aden #Somali Piracy
We're now 1/48th of the way through the first term of the Obama Administration, so it's time to grade how he's done so far on the various issues. My hope is to grade them against reality and the expectations he has set for himself, not the utterly unrealistic expectations set by the people that elected him.
#Barack Obama #Obama Administration #Tim Geithner
I was moderately positive on the nomination of Tim Geithner for Treasury Secretary, giving him a "B" when I graded Obama's appointments. Since the appointment, however, he's been less than impressive. First up was his little tax problem. No big deal. I'm sure there would be no negative ramifications if any of the rest of us owed $17K in taxes and interest from five years ago.
#Banking System #Barack Obama #Financial Crisis #Tim Geithner
Last week, President Obama signed an order to close the detention facility at Guantanamo Bay within the next year. This would be very good. Gitmo has come to reflect everything that was unseemly about Bush's foreign policy, and getting past it would be good both for the United States itself, and for the way we areviewed by the rest of the world. Now, however, comes the hard part: actually getting it done.
#Barack Obama #Guantanamo Bay
Obama campaigned on entitlement reform, and he continued to talk about it between the election and the inauguration. The first thing he is likely to "take on" is America's favorite ponzi scheme, Social Security. If nothing is done, outflows will surpass inflows in 2017. By 2041, the Social Security Trust Fund will have run out entirely, and Social Security will be completely dead.
#Barack Obama #Social Security
The first "scandal" of the Obama administration is upon us, with Democrat Illinois governor Rod Blagojevich being charged with trying to sell Obama's Senate seat. No allegations have been made by the prosecution that Obama knew anything about it.
#Barack Obama #Eric Cantor #Robert M. "Mike" Duncan #Rod Blagojevich
This week, president-elect Barack Obama made the last of his major nominations and appointments for his staff. Barring a Nannygate type of scandal, we know who be sitting at the table in Obama's White House. As a result, it's time to grade his choices.
#Austan Goolsbee #Barack Obama #Bill Richardson #Christina Romer #David Axelrod #Eric Holder #General Jim Jones #Greg Craig #Hillary Clinton #Janet Napolitano #Lawrence Summers #Paul Volcker #Presidential Appointments #Presidential Cabinet #Rahm Emanuel #Robert Gates #susan rice #Timothy Geithner #Tom Daschle

Given that I’m certainly going to bitch about Obama when he makes decisions with which I disagree (and I expect there to be many), it’s only fair that I give him credit for the good ideas.

It was leaked today that the Obama team is interested in exploring a prepackaged bankruptcy for the automakers. This is not a bad idea.

Please don’t misunderstand; my preference would be for the government to not become involved at …