I wasn’t able to watch television Tuesday evening, so the Wife and I watched both the performances and the results show Wednesday evening. One can certainly get through the shows quickly when you skip the commercials, fluff and repetiion.

The theme for the week was songs of Shania Twain.

Lee Dewyze
You’re Still The One

Loved the opening. It was really in a sweet spot of his voice. But why is he doing that John Mayer thing with his mouth, …

With the judges using their save on Michael Lynche last week, we had nine performances again tonight, and two going home tomorrow. The theme was Elvis Presley, with Adam Lambert mentoring.

I’m on the road this week, so notes might be a bit short.

Good song choice, with a nice gospel feel to the arrangement. The Wife loved it, and thought it was one of her favorites from Crystal.

#Aaron Kelly #Adam Lambert #American Idol 9 #Andrew Garcia #Crystal Bowersox #Katie #Katie Stevens #Lee Dewyze #Michael Lynche #Siobhan Magnus #Tim Urban
Still trying to catch up on my American Idol watching, so here are my thoughts on last night's performances by the guys.
#Aaron Kelly #Adam Lambert #American Idol 9 #Andrew Garcia #Casey James #Lee Dewyze #Michael Lynche #Tim Urban #Todrick Hall
With American Idol Season 8 on the books, here are the best performances of the season. I didn't include any of the results show performances, or Kris and Adam singing with Queen and Adam singing with Kiss would probably have been number one and two.
#Adam Lambert #Alexis Grace #Allison Iraheta #American Idol 8 #Anoop Desai #Kris Allen
Congrats to Kris Allen who won Season 8 of American Idol this evening. I just finished watching on DVR, and I'm ready to crash, so a few notes and it's off to bed for me. All in all, the two hour finale was a darn good show. Yes, they had several of those stupid group numbers, but they had quite a few good to great performances as well. And the star power of their guest performers was amazing.
#Adam Lambert #American Idol 8 #David Cook #KISS #Kris Allen #Queen
Like any American Idol fan, I'm very curious who is going to be named the American Idol winner this evening. In fact, I'm so curious, I don't want to wait. I'd rather use the data one can find on the Internet to try and predict who is going to win between Kris Allen and Adam Lambert. The first thing I did was to look at the Google Trends data. 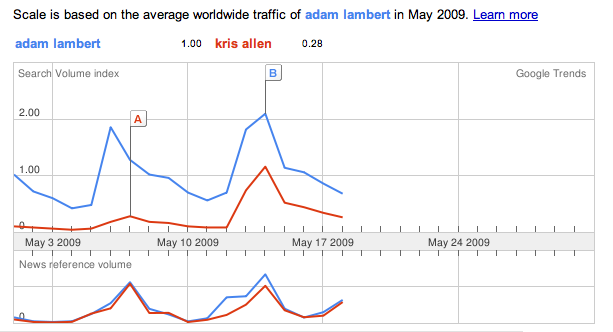 [/caption]
#Adam Lambert #American Idol 8 #DialIdol.com #Google Trends #Kris Allen #SEOmoz
The final performances of American Idol Season 8 are finally here. With seven thousand people in attendance at the Nokia Theatre, Adam Lambert and Kris Allen are to each perform their favorite song of the season, a song chosen by American Idol creator Simon Fuller, and the winner's song for the season, which was co-written by Kara DioGuardi.
#Adam Lambert #American Idol 8 #Kara DioGuardi #Kris Allen #Simon Fuller
Many of the American Idol contestants, both current and former, are popping up on Twitter. Unfortunately, I can't guarantee that these are all real. In fact, I can guarantee that some are fakes, as some have multiple accounts claiming to be that person. For now, I'm listing the multiples until I can determine the authoritative account.
#Adam Lambert #Alexis Grace #Allison Iraheta #Anoop Desai #Blake Lewis #Brooke White #Carrie Underwood #Casey Carlson #Chris Daughtry #Danny Gokey #David Archuleta #Elliott Yamin #Jason Castro #Jordin Sparks #Justin Guarini #Kara DioGuardi #Katherine McPhee #Kelly Clarkson #Kris Allen #Matt Giraud #Megan Joy #Melinda Doolittle #Michael Johns #Nigel Lythgoe #Paula Abdul #Randy Jackson #ryan seacrest #Scott MacIntyre #Sy Smith #Taylor Hicks #twitter
With more than 88 million votes cast, and less than one million votes separating first and second place, the smart money remains on Adam Lambert and Danny Gokey to make the finals of the eighth season of American Idol. But is one of AI's surprise results shows in store for us tonight? The Ford Music video was Matthew Wilder's "Break My Stride", with graphics reminiscent of A-Ha's "Take On Me". Visually interesting, but musically boring. Wait? No group song? It's going to be a better night than I expected.
#Adam Lambert #Alicia Keys #American Idol 8 #Danny Gokey #Jamar Rogers #Jordin Sparks #Katy Perry #Kris Allen #ryan seacrest
The final three contestants on American Idol season 8 performed two songs tonight. The first was a pick by the judges, and then they picked one of their own. None of my suggestions/predictions from the weekend were even in the right ballpark, so we're going to pretend that those never happened.
#Adam Lambert #American Idol 8 #Danny Gokey #Jordin Sparks #Katy Perry #Kris Allen