The Big Twelve Conference had a solid showing in the first round of the 2009 NFL draft, with seven players taken in the initial thirty-two picks. The St. Louis Rams took Baylor offensive tackle Jason Smith with the second pick. A 6' 5", 309 pound converted tight end, Smith was the first non-special teams All American for Baylor since 1995. Texas Tech's Michael Crabtree was picked tenth by the San Francisco 49ers. Crabtree is easily the most talented receiver in this years draft, but dropped quite a few spots due to concerns over his attitude and resilience.
#Baylor Bears #Big 12 Conference #Brandon Pettigrew #Brian Orakpo #Detroit Lions #Evander Hood #Jason Smith #Jeremy Maclin #Josh Freeman #Kansas State #Michael Crabtree #Missouri Tigers #NFL Draft #Oklahoma State Cowboys #Philadelphia Eagles #Pittsburgh Steelers #San Francisco 49ers #St. Louis Rams #Tampa Bay Buccaneers #Texas Longhorns #Texas Tech Red Raiders #Washington Redskins
Brian Orakpo, former defensive end for the Texas Longhorns, was picked by the Washington Redskins as the 13th pick in the first round of the 2009 NFL draft. By dropping to the Redskins, he is guaranteed to visit the state of Texas at least once every year, as he tees up Tony Romo in one of their two games every season. Said Orakpo shortly after the pick was announced: 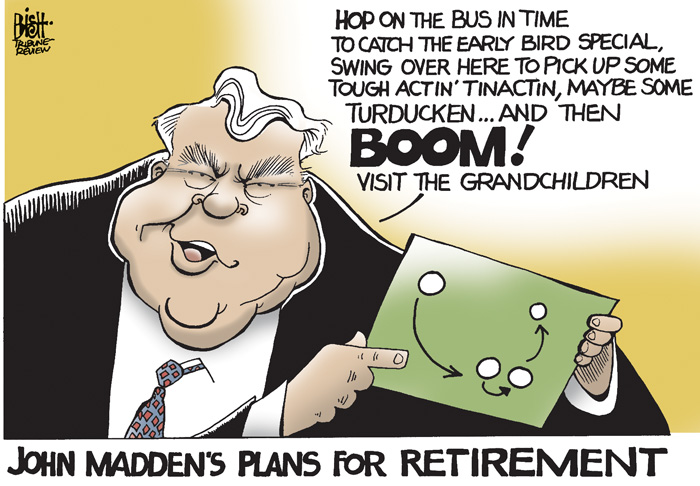 © Copyright 2009 Randy Bish - All Rights Reserved. Used with permission. John, I enjoyed watching you coach the Oakland Raiders and I enjoyed you commentary during NFL games. And I will always be grateful for your introducing me to the turducken. You will be missed.
#John Madden #Randy Bish
While there is no official word yet, ESPN and Fox News reported late last night that the Dallas Cowboys are going to cut Wide Receiver and Chief Derision Officer Terrell Owens. Good. If I want drama, I'll watch American Idol.
#Dallas Cowboys #National Football League #Roy Williams #Terrell Owens
The NFL has extended invitations to wide receiver Quan Cosby, defensive tackle Roy Miller, running back Chris Ogbonnaya, defensive end Brian Orakpo and corner back Ryan Palmer to participate in the 2009 NFL Scouting Combine. The Combine is a week long showcase that occurs every February in Indianapolis. College football players will perform physical and mental tests for coaches, GMs and scouts of the NFL.
#Brian Orakpo #Chris Ogbonnaya #Henry Melton #National Football League #NCAA Football #NFL #NFL Draft #Quan Cosby #Roy Miller #Ryan Palmer #Texas Longhorns
The situation in Dallas is beginning to make sense. It was announced this week that Michael Irvin is going to host a reality television show involving the Dallas Cowboys. Twelve wannabe football players will compete for a spot on the Dallas Cowboys' opening eighty person training camp roster.
#Dallas Cowboys #Jerry Jones #Michael Irvin #NFL Football #Pacman Jones #Terrell Owens
In a move that surprised few, the Dallas Cowboys fired Brian Stewart today. If Jerry Jones continues to follow the my-team-is-in-a-death-spiral playbook and lets Jason Garrett walk out the door, Wade Phillips is likely safe for at least one more season. Stewart was far from one of the core problems at Dallas. His unit was eighth in total defense, and led the league in sacks. He was, however, quite publicly stripped of his play calling duties after the 34-14 loss to the Rams this season.
#Brian Stewart #Dallas Cowboys #Jerry Jones #NFL Football #Wade Phillips
Today's Dallas Cowboys rumor is that it will be announced tomorrow (Saturday, January 17th) that Jason Garrett will be named the new head coach of the St. Louis Rams. Much of the shine that Garrett had after last season has been tarnished. It would not surprise me if Jerry wasn't as keen to keep him with the Cowboys as he was last season.
#Dallas Cowboys #Jason Garrett #Jerry Jones #Terrell Owens
The rumors and grumblings are growing within the Dallas Cowboys locker room that wide receiver Terrell Owens needs to be let go. I know I wouldn't shed a tear if he were given his papers. If this year proved anything, it's how critical chemistry is to a professional team. Looking strictly at the talent level in Dallas, they should have made a run deep into the playoffs. Instead, the team never really came together as a unit, and they didn't make the playoffs, finishing the season with a humiliating loss to the Philadelphia Eagles.
#Dallas Cowboys #Jerry Jones #NFL Football #Terrell Owens
The Dallas Cowboys began the process of cleaning house today, as Adam "Pacman" Jones was released. The only people that will miss his being in the Cowboys defensive backfield will be fans of the Philadelphia Eagles. The Cowboys release Jones after learning of yet another incident, this one a shooting outside a suburban Atlanta strip club in June 2007. Apparently, Jones did not disclose this incident to management.
#Dallas Cowboys #Jerry Jones #NFL Football #Pacman Jones