It’s been a few days since Hugh Freeze’s sudden departure from Ole Miss. It’s time to look back at the best memes created around Hugh Freeze. Some of these are in response to his “resignation”, but others are from other parts of his tenure.

Quick disclosure, a few years ago I actually met Coach Freeze briefly, but that will have no impact on my choices here. All that matters is funny.

This one from a game against Texas A&M most …

As some already know, I’m a major consumer of podcasts. I get most of my audio news that way. I listen to as many history podcasts as I can, and a few on entrepreneurship and music.

The are surprisingly few good podcasts on food, especially with the potential demise of the Alton Browncast (it hasn’t released a new episode in a number of months).

One of the best food related podcasts is Go Fork Yourself, by Andrew Zimmern of …

#Podcasts
As the social network Twitter continues its growth, more and more current Longhorn players are joining. Below is a list of the 2010 Texas Longhorns I could find on Twitter. Let me know who I'm missing (or if any of these are fake).
#Aaron Williams #Christian Scott #Curtis Brown #D.J. Monroe #Dominic Espinosa #Fozzy Whittaker #Jeremy Hills #John Chiles #Kenny Vaccaro #Kheeston Randall #Marquise Goodwin #Tray Allen #Trey Hopkins #twitter #Vondrell McGee
Dave Evans came to marketing through an unusual path, receiving a BS in physics and mathematics, with a concentration in art from the State University of New York at Brockport. In 1994, Dave founded the Austin Web Users Group with Mark Gaither and I. Also in 1994, he co-founded Digital Voodoo in Austin, Texas. Digital Voodoo initiatlly provided strategic marketing services, and now also provides specialized software applications supporting social business strategy.
#Dave Evans #Social Web Strategies
On May 15th, I placed an order for the equipment needed to attached my Nikon D200 to the Galileoscope I ordered the same day. I received an email two days later that the parts were backordered, but should be available in a couple of weeks. I wasn't too worried about it, as the Galileoscope hadn't even started shipping yet and I doubted I would receive it until sometime in July. Yesterday, the Galileoscope arrived. I had not received the parts from Adorama yet, so I logged into my account to check the status. All it said was that it's backordered as of May 17th. There was no projected ship date.
#Adorama #Galileoscope

Most of you know that I’ve started a new internet marketing firm called ionadas local. It provides search and social media services to local businesses. These will tend to be smaller businesses than the national brands I’ve worked with in the past.

If you have any feedback about the company, … 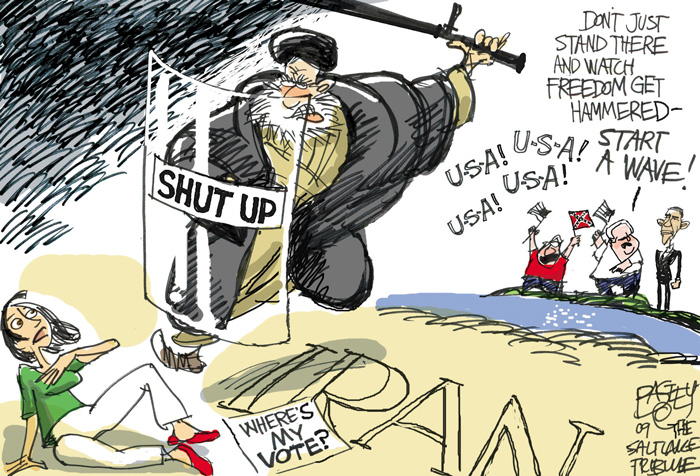 © Copyright 2009 Pat Bagley - All Rights Reserved. Used with Permission.
#Iran #Pat Bagley #Political Cartoon #Political Humor #twitter
Many of the American Idol contestants, both current and former, are popping up on Twitter. Unfortunately, I can't guarantee that these are all real. In fact, I can guarantee that some are fakes, as some have multiple accounts claiming to be that person. For now, I'm listing the multiples until I can determine the authoritative account.
#Adam Lambert #Alexis Grace #Allison Iraheta #Anoop Desai #Blake Lewis #Brooke White #Carrie Underwood #Casey Carlson #Chris Daughtry #Danny Gokey #David Archuleta #Elliott Yamin #Jason Castro #Jordin Sparks #Justin Guarini #Kara DioGuardi #Katherine McPhee #Kelly Clarkson #Kris Allen #Matt Giraud #Megan Joy #Melinda Doolittle #Michael Johns #Nigel Lythgoe #Paula Abdul #Randy Jackson #ryan seacrest #Scott MacIntyre #Sy Smith #Taylor Hicks #twitter
Continuing with the Who's Who in Social Media for the Texas Longhorns, here are some of the most important and prominent sites, publications and blogs. To qualify, a site must not only have social aspects itself, but be engaging in other social networks as well.
#40 Acres Sports #Barking Carnival #BevoBeat #Burnt Orange Beat #Burnt Orange Nation #Inside Texas #Mack Brown

Is it football season yet? Nope. We're still in the doldrums of the off-season, but I wanted to write about my beloved Texas Longhorns. So, like any decent blogger would do, I came up with a related topic to fill the void. To that end, I'm combining the Texas Longhorns with another of my favorite topics, social media, to create the "Who's Who of Social Media for the Texas Longhorns". The list includes bloggers, sports writers, and even former players. Part Two will include profiles of some of the most prominent sites.
#40 Acres Sports #Ahmad Brooks #Barking Carnival #Brian Behrend #Burnt Orange Nation #Cedric Golden #Clendon Ross #Drew Dunlevie #Facebook #Gail Goestenkors #Geoff Ketchum #Inside Texas #Kirk Bohls #Mack Brown #Marcus Myers #Martha Richards #Peter Bean #Randy Riggs #Suzanne Halliburton #twitter