As you can tell from my last few posts, the Wife, my 20-month-old daughter and I went on an Alaskan cruise with Disney last month. The seven night cruise started and ended in Vancouver, British Columbia, and included a day sailing through Tracy Arm Fjord and stops in Skagway, Juneau, and Ketchikan.

This was my second cruise, having been on a short Bahamas cruise with the Wife on Carnival. She has been on several other cruises, and it was Aubrey’s first, naturally. It was the first time on Disney for all of us.

Overall, the experience was very positive. The cruise is very well organized, which it has to be will all the children on board. Even so, it was not the terrifying chaos I experienced on Carnival.

We stayed in Vancouver the night before, so we wouldn’t be in a rush from the airport. After taking Aubrey to play in a park near our hotel, we loaded our bags in a taxi for the short ride to the Port of Vancouver.

The bags we were checking were taken at the curbside drop off, meaning we didn’t have to drag them through customs ourselves. That was a pleasant, but unexpected surprise.

We loaded Aubrey in a stroller, which I highly recommend. Trying to corral a toddler as we waited in the line for customs would not have been fun.

We brought a small stroller that folded up to about the size of a large umbrella. After we got to our room, it went into the closet and only came out for excursions. 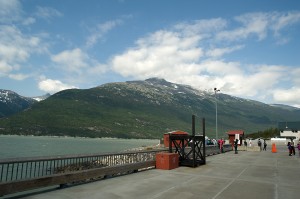 In any case, waiting in the line for customs took about an hour, as there were one or two other boats loading that day. The time was passed pleasantly enough talking to the other cruisers about where they were from.

After a few questions from US Customs (we were technically passing from Canadian territory to US soil at that point), we were through, and separated from the pack to head to our boat.

There was no line to talk to the Disney representative. He asked a few questions, had me sign a few places, and handed us our key cards. These are used for entry and exit of the boat, the door to our cabin, and for purchasing anything on board.

We walked down a hallway, had a quick picture taken (like all cruises do), and rolled up the gangway to the boat. Again, we were glad to have the stroller.

When we got to the entrance to the boat, we checked in using the key cards, and saw a number of Disney employees standing in the large open area just inside. One of the employee’s asked Aubrey her name. The Wife answered, and she announced over a loud speaker:

Disney Cruises would like to welcome Princess Aubrey aboard the Disney Wonder!

Then all the other employees there cheered and applauded. I’m sure if Aubrey were a bit older, she would have gotten a real kick out of it.

We headed up to our room (6th deck, port side) to drop off our bags. We choose a room with a verandah, so that we could sit on the deck as Aubrey napped every day in the early afternoon.

The rail on the verandah had plexiglass in front of it, so there was no way the Aubrey could either slip through or climb over. So, when we were in the room, we would just open the sliding door to the deck, and let Aubrey run. 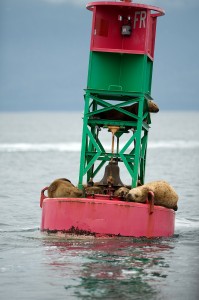 Other than keeping the bathroom door closed so Aubrey couldn’t play in the toilet, the only real issue is that we had to unplug the phone before Aubrey accidentally called Kazakhstan or something. There were no plugs that she could reach.

In fact, the only plugs were two plugs on top of the desk. The Wife and I each had an iPhone and an iPad. Granted, we weren’t using the iPhones, but wanted to keep them charged. And the iPads were being used as e-readers, so needed to be charged.

Plus, we needed to charge our camera batteries on occasion. There was also a walkie talkie system in the room that needed to be kept charged.

C’mon, it’s the Twenty-Teens! Give us a few more plugs! I left the laptop at home. I’ve sacrificed enough!

We changed into swimsuits and went out to explore the boat. We wanted to take Aubrey to the splash zone. As she’s still in diapers, she’s not allowed in the pools. Apparently, this is a restriction on all cruise ships, and makes sense to me.

We opted for the 5:45pm dinner seating, rather than the 8:00pm. Dinner rotated among three restaurants, but our serving team rotated with us, allowing us to get to know them.

The three of us were seated at our own table. I don’t know if they ever seat different groups at the same table, but this didn’t seem to be the case with anyone near us.

The food was good to very good, depending upon the night. No, you’re not dining at a five star restaurant, but I really had no complaints. Portions are certainly not Texas large, so feel free to order an appetizer, an entree and dessert. 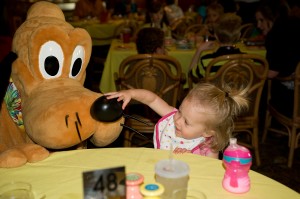 One morning was the designated “Character Breakfast” for our rotation. We showed up at one of the restaurants, and were served by our usual crew. Then, during the meal, the various Disney characters came around to each of the tables to meet the children and pose for pictures.

The other set breakfast was on the last morning. Again, it was with our usual serving crew, and the goal was clearly to get us fed and off the boat.

Other than this, the eating choices were the buffet, various “stands” around the pools for hamburgers, hotdogs, pizza, fruit and more, the restaurants in the rotation (for meals other than dinner), and Palo. 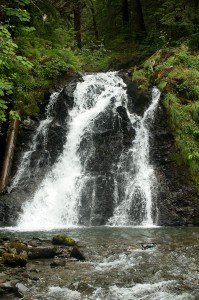 One morning, we checked Aubrey into child care, and went to have brunch at Palo. It was extremely tasty. The quality reminded me of the brunch buffet in the Wynn in Las Vegas, but not as large, of course.

The main buffet was decent, but a bit repetitive. After a couple of mornings, we were looking for some variety. The couple of lunches we had there were underwhelming.

The food by the pools was about what you would expect. Ok, but nothing to write home about.

One of the ways to survive a cruise with a toddler is to take advantage of the child care services in the Flounder’s Reef Nursery. We typically checked Aubrey in for about two hours on non-excursion days.

All indications are that she loved it. By the third day, she had figured out what it looked like and would pull us towards it when she realized where we were going.

So, in general, would I recommend a Disney Cruise for a family with a toddler? Absolutely, but with some caveats.

I’d certainly wait until your child can walk and run well on his or her own. Frankly, until they’re out of diapers, your only real option to get away from them is Flounder’s Reef. If they can’t run around in there, they might get bored.

As the kiddos get older, there are lots of options, up to and including night clubs for teenagers.

So, will we go on another Disney cruise? I expect so.

The one we’re looking at right now is a 15-night cruise that sails between San Diego, California and Miami, Florida via the Panama Canal. It’s available in the shoulder season as the Disney Wonder transfers from Alaska cruises to Caribbean cruises (and back again).

Surprisingly, it’s actually a bit cheaper than the Alaska cruise we took, even though it’s twice as long. I suspect that’s a combination of being during the shoulder season, having limited ports of call (Cozumel, Cartagena, Puerto Vallarta, and Cabo San Lucas), and having a bit less interest.

Sailing the Panama Canal is something I’ve always wanted to do, and it allows me to check off a currently unvisited continent (South America), so we’re going to take a serious look at it.

We’ll probably wait at least two years, because once Aubrey is out of diapers, the options for activities on the boat open up considerably. And given the number of “At Sea” days (eight, if I’m counting correctly), she could get very tired of Flounder’s Reef.