I’m in New Orleans this week for PubCon Spring 2013. My family came along, so we had Monday to run around the French Quarter together. 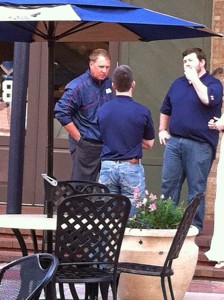 We ended up at Grand Isle Restaurant for dinner, and decided to sit outside, since there was a nice breeze. Across a narrow courtyard from us was the sports bar Manning’s, which was hosting an alumni event for Ole Miss.

My father-in-law is an Ole Miss alum, so I follow their football team a bit, more than any other SEC team, most likely. I’ve been impressed with the excitement that Hugh Freeze has brought to the program in the last year or so.

As we were sitting there watching people enter the party, wondering if anyone famous would show, an Ole Miss tour bus pulled up. That was an interesting development.

Off the bus walked what I assume is most of the football coaching staff, as well as head coach Hugh Freeze himself. He spent some time schmoozing with Ole Miss folks outside the party, then did a round of the people in the courtyard.

When he got to us, we talked for a few seconds and he was kind enough to pose with me for a photo. I wished him luck next season, and he moved on.

In retrospect, I should have wished him luck, except for the little game in Austin, but I wasn’t quick enough.

A little later, Deuce McAllister walked into the party. I didn’t get to meet him, but was impressed by the Superbowl Ring he had on.