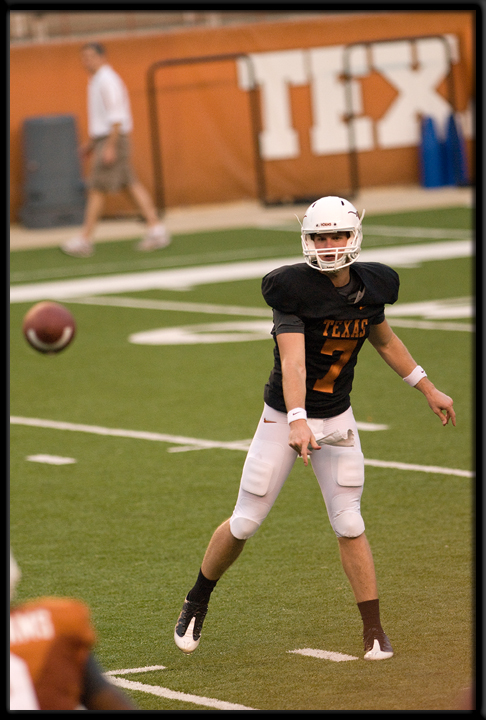 In three days, the Texas Longhorns football season opens, and the Garrett Gilbert era begins. While we received a taste of what he brings in the National Championship Game against Alabama, Gilbert has now been working as the starting quarterback since spring practice, and has an offense designed around his traditional, drop-back-quarterback, strengths.

But make no mistake, the Longhorn season rides on the shoulders of Gilbert’s 6′ 4″ frame.

With the departure of Sherrod Harris from the team, true freshman Case McCoy becomes the backup quarterback. If Gilbert were to go down early, a four loss season becomes possible, and perhaps likely.

Which shows the importance of the offensive line. While the OL has talent, and the new offensive scheme caters to their abilities, it’s going to take some time to gel. And one or two injuries could make things rather scary.

Running back by committee will continue for at least a while, but Cody Johnson has emerged as the number one back. Expect big doses of Fozzy Whittaker and Tre Newton as well. Hopefully, we won’t see much of anyone else except in garbage time.

At wide receiver, we desperately need a first and second option to step forward. At the open practice I attended, Gilbert’s timing looked good with everyone, but things may be very different in a real game. To their credit, they’re practicing against one of the best defensive back units in the country, so they’re getting solid experience during the week.

Clearly, all WR positions are open. John Chiles has put in the work and has the right attitude, and will be given the opportunity to make something of himself. Malcolm Williams and Marquise Goodwin are our big play threats. If Williams can be consistent and Goodwin can stay healthy, they’ll take a lot of pressure off the offensive line.

Freshman Mike Davis will be a star before the end of the season.

If not, it could be a long year, although the defense should keep us in most games.