My efforts at astrophotography have been rough lately. The best convergences of the last few months have been cloud obscured. This included Friday night, when the full moon was only a few degrees away from Mars, which was at opposition to the Earth.

Note: Opposition is when the Earth and a planet are in line with the sun, marking their closest approach in a particular orbit of the sun. Due to the elliptical nature of the planets’ orbits, not all oppositions are the same distance. On Friday, the Earth and Mars were 62 million miles from each other. The closest they can come is 35 million miles, which occurred a few years back.

In any case, a cold front that rolled through Central Texas on Friday kept things fairly cloudy, ruining my chances of getting a good photograph. It cleared around 11pm, but at that point, the Moon and Mars were too high in the sky to line them up with my tripod. Does anyone have a spare gimbal tripod mount?

Last night (Saturday, January 30, 2010) the skies were as clear as could be, however. While the Moon and Mars weren’t as close as they were the previous night, it was still a nice pairing.

Click on an image to see a larger version. Mars is at 11 o’clock from the Moon. 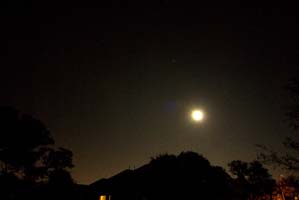