This morning’s keyword at Online Market World was given by Kathy Ireland. She talked about her company, Kathy Ireland Worldwide, and its usage of the Internet to build brand. 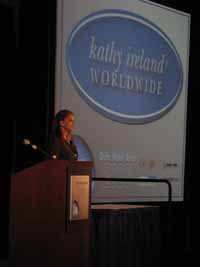 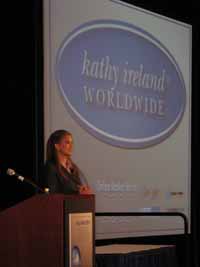 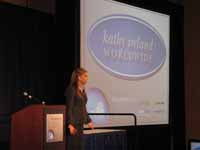 Her keynote basically consisted of a series of short anecdotes, many of which were either entertaining or informative. There wasn’t really a common thread pulling through the presentation, which made it easy to lose track of what she was saying. On the other hand, it was also easy to pick it back up again.

One of my favorite anecdotes was about her delivering papers as she was growing up. Naturally, there was considerable resistance to a female doing such work, but she broke through that, and became the best paper delivery person in her region.

There was a bit of a cheerleading “You can do it! You can succeed online!” to the speech, but the crowd really seemed to eat that up.

The highlight for me was her quoting Vince Lombardi. Seeing a former Sports Illustrated supermodel reciting wisdom from a Hall of Fame football coach can’t help but bring a smile to the face of a man who was a teenager in the 1980’s. 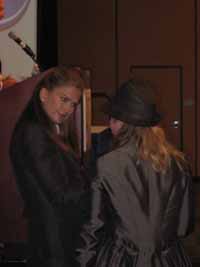 She had to run to catch a flight a few minutes after the presentation, so she didn’t have too much time to answer questions one-on-one. I did overhear someone ask her about the paper delivery job, and she mentioned that Warren Buffett was a paperboy when he was young, and that this is all the two of them talk about when they see each other.