The Piggies came to town today. I still have post traumatic stress disorder from their last visit. No problems today, however, as Texas wins by the score of 52-10 for the third time this year (fourth win total). A great first step on their six week tough road.

Pregame was the usual great show. 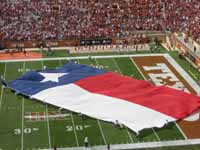 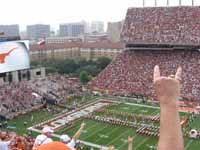 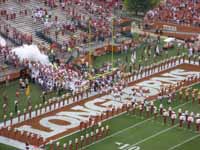 I managed to get a couple of decent shots of the game, even though I only had my wife’s little digicam (the only long lenses I have for the Nikon D200 are large enough to probably cause me to be rejected at the gate). 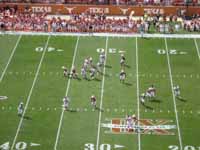 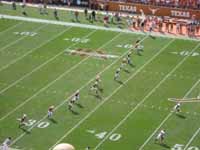 I need to get some glass with reach that doesn’t look so imposing.

Half-time was Ray Benson of Asleep at the Wheel playing with the Longhorn Band. At least, it looked like LHB was playing. I couldn’t actually hear them. 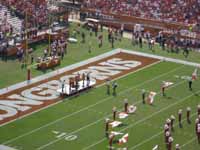 So, I’m cautiously optimistic that Texas is for real this year. I don’t see a MNC game in our future (or even, likely, a BCS game) unless we run the table on the next five, but today was good to see. No, Arkansas isn’t the team they’ve been in the past, but they almost always come into Austin and play us tough.

We quite frankly manhandled them today. Big improvement on the defensive end, with considerable pressure being put on the Razorback QB. They only gave up three points today, as the touchdown came on a fumble by Chiles that was returned for a touchdown.

The offense considers to move the ball well, but I’d sure like to see a real tailback emerge. It’s never good to have your quarterback be your leading rusher (assuming he doesn’t have the initials VY).

Three passing touchdowns and two rushing touchdowns by Colt McCoy should probably start at least some dark horse Heisman talk, but I don’t really expect to hear any until/unless he performs well against the Sooners.

With losses today by Florida and by USC on Thursday, and a probably loss by Georgia (it’s 31-3 Alabama in the 3rd quarter as of this writing), Texas should easily move into the top five this week. A win over Colorado next week, and the Red River Rivalry is looking darn interesting.