On behalf of the State of Texas, I’d like to apologize for giving you George W. Bush.

You have to understand, he really wasn’t that bad as Governor of Texas. Sure, he didn’t do much, but we rather like that down here.

He actually seemed like something of a uniter, working with both the Republicans and the Democrats in office. He certainly didn’t come across as a Big Government Republican, war-mongering, spying-on-Americans, torturer.

Sure, we thought sending him to Washington would increase the average intelligence of both Texas and Washington. Who knew he’d be so grossly incompetent? Heck, even The Economist endorsed him! And they’re British! 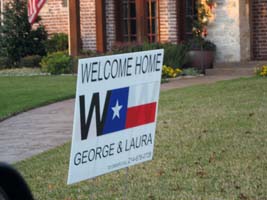 Just so you know, some Dallas residents are welcoming Bush back with open arms. We’ll do our best to keep him quiet and out of the way.

And we promise not to send you any more of the Bushes.