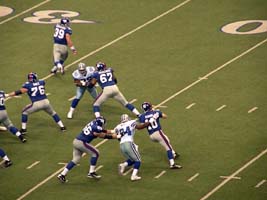 As I posted previously, we were on the second row of the upper deck, so we had a great view.

Unfortunately, much of the view was taken up by the four, um, “ladies” in front of us. I’m fairly confident that they were all ex-strippers, and I suspect that they might have looked good at some point in the 1980’s. Let’s just say they were past their prime.

They were all very drunk (with perhaps some other chemicals involved), all sashayed like bad burlesque dancers to the various songs being played over the loudspeaker, and they all constantly tried to make eye contact with all the guys in the rows behind them.

And they were very obnoxious. Two were Cowboys fans and two were Giants fans. They were yelling and screaming, and talking smack to each other constantly, no matter what was actually going on in the game.

Worst of all, the one right in front of me must have done the extra line off the mirror, because she was jumping up and down without a break until well into the third quarter. And after a short break to stuff her face with nachos, she was back at it for the entire fourth quarter. That must have been some good stuff she got.

I’ll post what will probably be the last group of photos in the next few days.