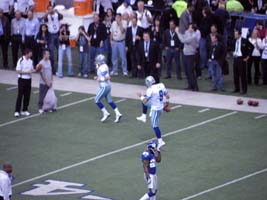 This past weekend, I attended my first NFL game, and more importantly, my first Dallas Cowboys game. The wife bought me a pair of tickets for my birthday a few months back, and I was nice enough to bring her with me.

To say it was a different environment from a Longhorn game is a huge understatement. While there is certainly drinking going on before (and during) a college game, the number of truly smashed fans is relatively small. At the Cowboys game, the opposite was true. Those of us who were sober were actually the exception.

The number of drunken revelers we passed on the mile-long (or so) walk from the car to Texas Stadium was astounding. Fortunately, most everyone seemed to be there to have a good time. Some of the tailgating setups were impressive.

We were fortunate that the direction we came from was the correct one for our seats. Just a short walk up a couple of ramps (easy compared to DKR MS Upper East Deck) and we were pretty much at our section. We were on the second row, so the view we had was great.

In many ways, the pre-game festivities were less interesting than those at a Longhorn game. Maybe it was the lack of a band. Ted Nugent did play the National Anthem on the guitar. The man can still play.

And, of course, there were the world famous Dallas Cowboys Cheerleaders. My wife is a huge fan of the CMT show about their tryouts, so I had a great excuse to take lots of pictures of them. In fact, I was encouraged to do so.

I’ll post about the game itself, and the interesting group of women sitting in front of us, in the near future.