What was it I heard on ESPN about Quan Cosby and Bing Crosby hanging out together during NFL Draft Day? 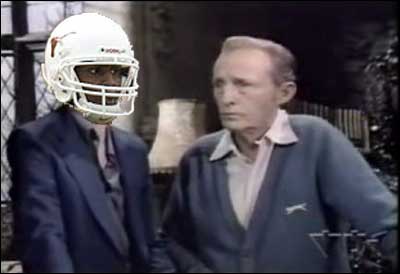 #Bing Crosby #David Crosby #NFL Draft #Quan Cosby #Rita Cosby
The Big Twelve Conference had a solid showing in the first round of the 2009 NFL draft, with seven players taken in the initial thirty-two picks. The St. Louis Rams took Baylor offensive tackle Jason Smith with the second pick. A 6' 5", 309 pound converted tight end, Smith was the first non-special teams All American for Baylor since 1995. Texas Tech's Michael Crabtree was picked tenth by the San Francisco 49ers. Crabtree is easily the most talented receiver in this years draft, but dropped quite a few spots due to concerns over his attitude and resilience.
#Baylor Bears #Big 12 Conference #Brandon Pettigrew #Brian Orakpo #Detroit Lions #Evander Hood #Jason Smith #Jeremy Maclin #Josh Freeman #Kansas State #Michael Crabtree #Missouri Tigers #NFL Draft #Oklahoma State Cowboys #Philadelphia Eagles #Pittsburgh Steelers #San Francisco 49ers #St. Louis Rams #Tampa Bay Buccaneers #Texas Longhorns #Texas Tech Red Raiders #Washington Redskins
Brian Orakpo, former defensive end for the Texas Longhorns, was picked by the Washington Redskins as the 13th pick in the first round of the 2009 NFL draft. By dropping to the Redskins, he is guaranteed to visit the state of Texas at least once every year, as he tees up Tony Romo in one of their two games every season. Said Orakpo shortly after the pick was announced: