I walked into the backyard this evening and was surprised by a fairly nice astro-convergence happening tonight. A waxing moon formed a triangle with Venus to the lower left, and Jupiter to the upper left.

I took a few quick pictures off my back porch. Didn’t have time to do anything to fancy.

Here’s my favorite. Scroll down to see the whole thing.

#Mars #Moon #Venus
My efforts at astrophotography have been rough lately. The best convergences of the last few months have been cloud obscured. This included Friday night, when the full moon was only a few degrees away from Mars, which was at opposition to the Earth. Note: Opposition is when the Earth and a planet are in line with the sun, marking their closest approach in a particular orbit of the sun. Due to the elliptical nature of the planets' orbits, not all oppositions are the same distance. On Friday, the Earth and Mars were 62 million miles from each other. The closest they can come is 35 million miles, which occurred a few years back.
#Mars #Moon 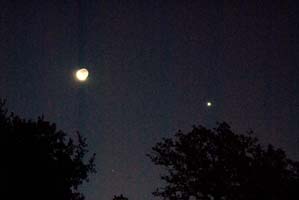 In what has become a busy week for astrophotography, the Moon and Venus danced close together this evening, with the Moon in its faintest mode and Venus in its brightest. Both were actually crescents. Unlike the Moon, which is in a crescent phase when it is least bright, Venus is at its brightest when it is a crescent. This is because it can only be a crescent when it is relatively close to us, and can only be full when it is on the other side of the sun from us (and thus fainter due to distance).
#Astrophotography #Moon #Venus