Unless you’ve been living under a rock the last few days, you know that Apple released the iPad on Saturday. Paul Groepler, the unrepentant, bleeding-edge, early adopter, had to have one, of course. Here are his initial thoughts. 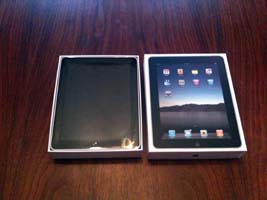 Saturday at 10am the UPS guy showed up at the front door with my iPad. I’ve taken a few wacky photos to show you what’s in the box…not much actually.

Okay, I’ve been thru one day with this thing and a few of you are curious, so here are my initial impressions: 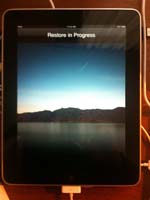 While my initial reaction to the iPad announcement was decidedly negative, I’ve slowly been coming around. My PowerBook G4 is both old and high mileage, and is long overdue to be replaced. Processing video from my Flip UltraHD is nearly impossible.

On the other hand, I could get a high-end iPad plus a high-end Mac Mini for about $1,500. For this to work, however, the iPad would have to do the job for me when I travel. The Mac Mini isn’t really portable (unless I took all the peripherals with me), and I’m not carrying both a iPad and a laptop.

The iPad would need to sync tightly with my Mac Mini when I was at home. If that isn’t the case today, it soon will be.

I’m most concerned about the weak office applications. For this to work on the road for me, I need word processing, spreadsheet and presentation apps. And they need to be able to create and run MS Office compatible data files, especially for presentations.

Like it or not, Microsoft PowerPoint is the industry standard, and I need to be able to supply PowerPoint files when I speak at conferences or other events. I’m not sure a dumbed down version of iWork is going to do the job.

All in all, it sounds like a decent product, but not one that’s quite ready for my own work environment. But that may be why I rarely buy cutting-edge technology.