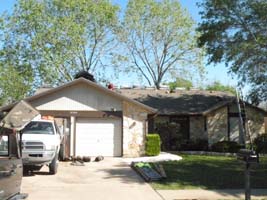 I had a house in Anderson Mill (northwest part of Austin) that I was trying to sell. We had refurbished it and it was priced appropriately, but in this economy, it’s hard to sell any house.

After about five weeks on the market, we got an offer: a cash deal to close in ten days. Nice!

Unfortunately, the offer came in the same day that we had the horrible hail storm. Obviously, if the roof was damaged, it would have to be repaired before the sale closed.

We called our insurance company, and they sent an inspector out a couple of days later. His recommendation was that the roof would need to be replaced entirely.

While we couldn’t move forward with the replacement until the insurance company signed off on it, the Wife began calling roofing companies to try and set things up. After talking to several, we decided to use Acura Roofing. In addition to being willing to wait to be paid until we received the insurance money, he was able to work on us on the scheduling of the replacement.

The two days it was supposed to take to gain approval from the insurance company stretched into a week. Our buyer was very understanding, but we were worried they would decide to go elsewhere.

Finally, after much harassing from me, the insurance company approved the replacement on our originally scheduled close date. Our buyer had agreed to delay the close by three days, but understandably wanted to have the roof replaced prior to close.

Things were finally moving again, but we only had a couple of days to get the roof replaced. We had been in touch with Patrick at Acura Roofing regularly, so he was aware of our need for a short turn around.

Even so, Patrick delivered well beyond any reasonable expectations!

He was informed that we had the go-ahead at about noon on a Monday. By 8am Tuesday morning, he had a crew out working on the roof. And they finished the roof (plus cleaned the gutters, painted the roof stacks, rolled the yard with a magnet for nails, and hauled away all job-related trash) on the same day.

This allowed the buyer to reinspect the house on Wednesday, and we were able to close the sale on Thursday.

Thanks again, Patrick. You guys at Acura Roofing did a great job!