I’ve been taking astrophotographic pictures for a few months now, and while I’m certainly no expert, there are a few things I’ve learned. I’d like to share some of the insights I’ve had taking such pictures with my Nikon D200. Most of the advice should be translatable to any digital SLR. 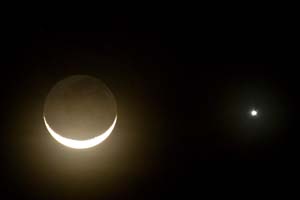 To begin with, yes, you can take good photos of astronomical objects with a digital SLR. But, no, you’re not going to get closeups of planets with such a setup.

The longest lens you’re likely to have is a slow 500mm. Not accounting for any crop factor your camera might have, that’s only a 10x magnification. Most planetary observers use telescopes in the 20x to 30x range. That would be equivalent to a 1,000mm to 1,500mm lens!

So don’t expect to resolve even planetary objects, much less extra-solar ones, with your SLR setup. But you can get great pictures of constellations, asterisms, or convergences.

Let’s talk a bit about exposure. As you hopefully know, exposure is the combination of shutter speed, aperture, and ISO. For a primer, I recommend Photo.net’s wonderful article on exposure.

1) What is a proper exposure?
In most photography, a proper exposure can be determined within a relatively small band of potential exposures. Sure, some might prefer a darker image and others a lighter one. Or the calculation might be particularly complex, as with some landscapes where you can have ten or twelve stops from the lightest to the darkest areas.

In any of these cases, the exposure can be determined, whether by the camera itself or something like the zone system.

In general, all objects are at basically the same light level (e.g. dark). This changes with the moon, especially as it gets fuller. Gaining a proper exposure of the moon while properly exposing any other night sky object can be very difficult.

In all cases, bracket like crazy. I would shoot at least a couple of stops lighter and darker (in one-half or one-third stop increments) to make sure you get the shot.

If you’ve even been outside at night anywhere other than downtown Las Vegas, you’ve probably noticed that it’s dark. And even the most expensive lenses on the market do not pick up light as quickly as the human eye.

Astrophotography can lead to some rather long exposure times. You don’t want to turn your ISO up too high as that leads to more digital noise in the image.

Unfortunately, longer exposures also generate digital noise. You need to find a balance that works for your equipment. 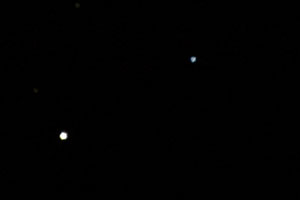 With my D200, I generally shoot at ISO 400 (occasionally ISO 800, if I must) with my lens preferably half a stop down from wide open (not always easy with a longer lens), and in-camera noise reduction turned on.

3) Dealing with subject movement
You’ve decided how light or dark you want your image to be, and you’ve done your best to account for digital noise, but then you notice that your subject is actually moving.

Unlike a friend or family member who might hold still if you complain, or a pet who will probably just run off if you do so, stars and planets don’t much care how much you bitch at them. They’re going to keep moving at their slow and steady pace (yes, I know it’s technically the earth’s turning that is causing the motion).

In the scheme of things, they’re not moving all that slowly. Even exposures as short as five or six seconds can show blurring due to subject movement.

There are fancy motorized systems that can adjust your rig to stay locked on the subject, but if you have such a thing, you probably are using a telescope for your astrophotography anyways.

Did I mention that you should bracket like crazy? I would bracket adjustments on the exposure, as well as shooting with various ISO’s.

Few things are more frustrating then heading out to shoot at night, and realizing that you didn’t capture a single good image. Take a lot of pictures, with a wide variety of settings, to make sure you get some good one.

Now let’s look at some of the equipment concerns:

Tripod
A good solid tripod is a must. The heavier, the better, or you may find that a stiff breeze ruins your shot.

Tripod Head
You need a tripod head that can quickly and easily be adjusted in any of the three directions.

It also needs to be able to lock down tight exactly where you want it. The heavier and longer the lens, the greater concern this is.

I have a Bogan pan/tilt head, with a knob to lock down each of the three axes. With longer lenses, however, it shifts some as I turn the knob to lock it, sometimes taking the subject all the way out of the picture.

I’m hoping to replace this head with a better one in the future.

Cable Release
You don’t want to spend several hundred on a premium tripod and tripod head assembly and then blur your image when you trip the shutter. If your camera supports a cable release (the D200 does), spend the $15 to get one.

If if does not, get the wireless release system. If there isn’t one available (or you can’t afford it), I suppose you could use a shutter delay, but realize that your subject is moving out of frame while your delay ticks by. It’ll also make taking a large number of shots just that more difficult.

You’ll be much happier with a cable release.

Lenses
Bring the longest you have. I’ve got the Sigma 50mm-500mm and it works well, although I wish I’d bought the 170mm-500mm instead as it’s a bit sharper. That one actually was less expensive, although it is now discontinued.

The next lens in your kit should be a fast 70mm-200mm. You’ll shoot most of your constellations and asterisms with this lens. I use the Nikkor 70mm-200mm f/2.8 VR.

You also want a 24mm-70mm. Faster is better. Some of the asterisms need more a field of view wider than the 70mm-200mm gives (especially with the crop factor of most digital SLRs). I use the Sigma 24mm-70mm f/2.8 VR.

Lastly, if you own one, bring an ultrawide for truly majestic shots, either with or without star trails. I’ve got the Sigma 15mm-30mm for this.

I’ve never used anything funky like the Pro-Optic 420-800mm, so I couldn’t really tell you whether it’s worth a damn. 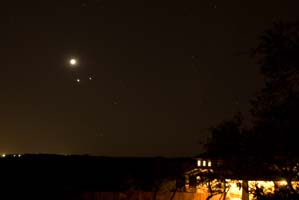 Light Source
Unless you have every bloody control on your camera memorized, you want to bring a light source with you. Preferably one that doesn’t completely blow out your night vision.

I find that the iPhone’s LightPad application does a good job on this.

You can also get small flashlights that are tinted red so that they don’t screw up your night vision. I’ve got one somewhere, but never seem to remember to bring it.

Star Maps
You can’t take pictures of things unless you know where they are. A star map tells you how to find stars, planets, and other interesting objects. I’m too lazy to read one.

So I use another iPhone application called GoSkyWatch. It gives you a live map of the sky, based upon the time and your location. If you can find the moon and a couple of the constellations, this may be all you need to orient yourself and find your target.

Once you have all your equipment ready, you need to know what’s going on in the sky. There are any number of websites devoted to this subject, but I often forget to visit them.

So, I have my iTunes subscribed to a number of podcasts on astronomy including:

Between these three, you’re unlikely to miss something notable happening such as an interesting convergence or a visiting comet.

You can’t judge the quality of one of these photos on the camera’s screen, so take lots and lots of pictures.