With just hours, I mean minutes, left until Signing Day, let’s take a quick look at the list of those expected to join the 2009 Recruiting Class for the Longhorns.

Big, strong, and fast enough to contribute on the O-line immediately, a year or two under Maddog’s care will turn Ashcraft into a monster.

The size of a safety with the speed of a cornerback. If he can learn to turn his body with the receiver he could shutdown his side of the field.

Another corner back built like a safety, Davis is great in zone coverage, but has shown some weakness in man-to-man. Do your magic, Akina. 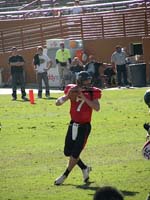 Already anointed by many as the next great quarterback at Texas, Gilbert may have the talent to deliver. He certainly learned how to win at Lake Travis. Can he put it all together and lead the team?

A track star that will have to decide between football and track in the near future. Size may be a concern in football.

A bit of a project, but Graham has the potential to be the first true tight end Texas has fielded in a couple of seasons.

Howell is going to give opposing quarterbacks nightmares. Big, fast, and incredibly athletic, he will draw many a double team.

Johnson already has the size and strength to play at the college level. He does need some work on the hand- and footwork.

A lightly redshirt, Jones has a lot to learn, but has considerable upside.

Big and fast, and already knows how to block for our future quarterback. Has the hair of a wannabe rock star.

A real project that will need to put significant effort in on the practice field and in the weight room if he hopes to crack the two deep.

May split time between tight end and h-back.

With some effort in the weight room, Mims may convert to defensive tackle, which would likely provide him with more playing time.

Undersized but over-quicked for a linebacker, Nkwopara may help Muschamp break down the spread offenses of the Big 12 Conference. Before he’s done at Texas, we’ll all know how to pronounce his name properly.

Okafor is the heir apparent to Orakpo. Those are mighty big shoes to fill, but he may be able to do it.

Huge, strong, and fairly athletic, Porter may compete for playing time from the start.

Although sometimes guilty of over-pursuit, Vaccaro has the skills to continue the long line of great Texas safeties.

While large enough to play tackle at the college level, Walters has the quickness and athletic ability to play center.

His size makes many think he won’t stay at running back, but I’d sure love to see a strong, fast running back at Texas again. It’s been a long time. C’mon, Greg Davis! All the other schools get to have productive tailbacks. Why can’t we?

I’ll update this page as details on signatures come in tomorrow.

Update #1: Edited to reflect those already on campus, and those that have sent in their paperwork today.

Update #2: All signatures that were expected to come in, did come in. Now we’re just waiting on our two potential bluebirds, Dre Kirkpatrick and Jarvis Jones.