This previous Saturday was a perigee full moon. This is a full moon that corresponds with the moon being at the closest point of its elliptical orbit. Such a moon is 14 percent larger and 30 percent brighter than a typical full moon.

So, I headed down to campus to, well, shoot the moon.

My hope was to frame the moon alongside the UT Tower. I got down there before sunset, in the hopes that I would get a nice orange sunset to shoot as well.

No luck on the sunset. While there were some clouds to the west, they didn’t really turn colors for me. Nice texture, however. (Click on the photo to the right for the larger version.)

As the light failed, I headed to the West Mall, as the moon was rising in the east-north east. I had a couple of problems there, however.

First of all, it was very cloudy to the east, and even without buildings in the way, the moon was fairly obscured.

Second, damn, there are a lot of trees on West Mall. I remember there being trees, but they weren’t as tell when I went to Texas. Granted, that was twenty years ago.

So, my view from the west was obscured by trees and that little building, the Undergraduate Library. The odds of getting any shots of the moon were small, at best.

So, I headed over to South Mall to get a couple of shots of Tower straight on (click on the image for a larger version): 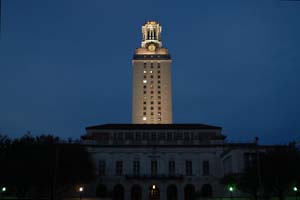 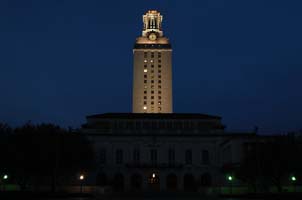 I’m not sure which I prefer. The detail is better on the first, but I love the dark blue sky on the second. I’d love to hear your opinions.

After shooting these, I headed back to West Mall to see if things would clear up there. No such luck, and I was freezing my klavey, so I headed home.

I’d call it a failed attempt at astrophotography, but a successful picture of the tower.

Technical Notes: All images shot on a Nikon D200 with a Sigma 24-70mm f/2.8 lens on a tripod with a cable release. I used a circular polarizer on the first image, but not the other two.