Heading into the 2008 season, most pundits penciled the Texas Longhorns down as a three or four loss team. I personally thought we would see at least two losses. Instead, the unrespected, underrated Longhorns went 12-1, with a solid win over Oklahoma and dominating wins over Arkansas and Texas A&M.

By any reasonable measure, this is the second or third best season in the last twenty years.

Let’s look back at some of the highlights…

Colt McCoy Turning Into a Superstar
After a mediocre sophomore effort, McCoy returns his junior year and blows away all expectations, with both his leadership and his play on the field. Let’s look at some of the stats:

Not bad for a 3-star high school recruit.

Did you know that he and Jordan Shipley are roommates?

Becoming the Second Most Winning Team in the NCAA
We have now surpassed Notre Dame to have the second most wins of any NCAA team, with 832 victories. We still have some ground to cover to catch up with the winningest team, Michigan, who has 872 wins.

He won the Bronko Nagurski Trophy and the Hendriks Award, and was a consensus All-American. And he graduated in December.

Opposing o-linemen and quarterbacks are breathing easier now that his eligibility is spent. 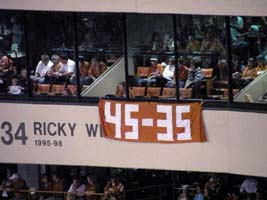 Lest We Forget, 45-35
We’ve now won three of the last four, with the most recent being a hard-fought, but convincing win over a very good Oklahoma team. The Big Twelve Conference and the BCS may not think head-to-head results matter, but we Longhorn Faithful know who is better.

Putting the Aggies Back Where they Belong
Few things hurt more than losing to Texas A&M, and the two consecutive losses were especially painful.

The Longhorns turned that pain around this year and gave it back to the Farmers, with a beatdown of Biblical proportions, winning by the largest margin of victory since 1898.

Will Muschamp Sticking Around
First-year defensive coordinator Will Muschamp is clearly the hottest assistant coach in NCAA football right now. Universities all over the country were courting him, and he could have had his pick.

Instead, athletic director DeLoss Dodds assures him of receiving the head coaching position after Mack Brown (assumably because Brown moves up to AD upon Dodds retirement) and doubles his salary to nearly a million dollars.

Muschamp tells everyone else, “No thanks. I’ll stay at Texas.”

Winning the Tie-Breaker Against Ohio State
We’ve now played Ohio State, one of the greatest football traditions ever, three times, and won two of them.

Yes, we were favored in the Fiesta Bowl, and our win was far from dominating, but the Buckeyes match up very well with Texas, and played their best game of the season by far. I’m very happy to get out of there with a win. Any win.

The Ambassador of Quan becomes a Legend
Quan Cosby closed out his Longhorn career in the Fiesta Bowl with 14 catches for 171 yards and two touchdowns, including the diving game winner.

He’s also a phenomenal downfield blocker, as show by his block on Colt McCoy’s touchdown run in the Fiesta Bowl.

Quan now heads to the NFL draft, where he is predicted to go in one of the mid-rounds. Not bad for a 26 year old.

I called this the second or third best season in the last twenty years because it’s hard to say whether this is better or worse than the 2004 season. There are definite similarities between both years, as strong Texas teams exceeded expectations, but had a hard fought, heart breaking loss. They both also ended with exciting BCS Bowl wins over a traditional football power.

And, we all know what happened after the 2004 season.

Next season is shaping up to be very similar. We’re losing some amazing talent (e.g. Orakpo), but the core of the team is coming back. Many of us have been looking at 2009 as “the year” since Vince’s 2005 season, and I see no reason to change that opinion now.

1 Comment on “Thank You, Longhorns, for a Great Season”